Last month I wrote about the proposal to build 55 houses in the middle of New Ridley on green belt land. I met a number of residents and was asked whether a petition could be raised to protest the matter. So, aided by some keen local helpers, we collected 81 names which include the majority of New Ridley's residents. Here are a few of us: 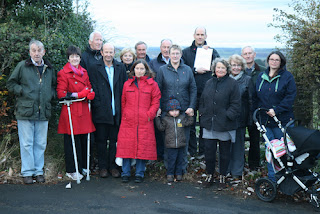 Yesterday evening I had the privilege of delivering the petition to the county council's West Area Committee. In the afternoon I learned that the developers have revised their plans following the consultation event at the golf club and intend to submit an application to build 25 houses instead. Esh are quoted in the Newcastle Journal as saying:


This is a substantial change and we hope that it will meet with approval.

Granted, the new proposal is 55% smaller, but from the views expressed to me by residents, I would be very surprised indeed if such approval will be found locally. It would still entail a nearly 50% increase in the size of New Ridley, a village which, lets face it, has no amenities.  In addition, here are a few more reasons that make this development problematic:
Once the plans are submitted the Parish Council will also be able to make representations. If you have any input you want to make or ideas to share please feel free to leave a comment below.
Posted at 20:16